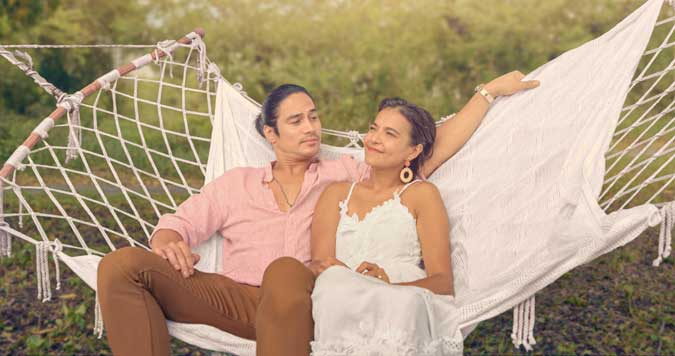 My Amanda on Netflix

NETFLIX Philippines’ film My Amanda, stars Alessandra de Rossi (this is also her directorial debut) and Piolo Pascual (who is also the co-producer). My Amanda tells the story of unusually close best friends while dealing with their respective complicated relationships. My Amanda is produced by Spring Films and AWOOO. It premieres on Netflix on July 15.

KYLE Echarri comes out with his second full-length album New Views. In a major shift from his debut album, which came out in 2016, the 18-year-old artist wrote all seven original tracks included in the album from ABS-CBN’s Star Pop label. He was also heavily involved in the production of most of the songs. Label head Rox Santos is the album’s supervising producer. Its key track, “Liligawan Na Kita,” is a writing collaboration between Mr. Echarri and his Huwag Kang Mangamba co-stars Seth Fedelin and Andrea Brillantes. The song, produced by Mr. Echarri and co-performed by Seth, talks about one’s willingness to wait and court someone very special. Mr. Echarri’s 2020 single “I’m Serious” is also included in the album, along with “Dyosa” which was produced by RnB singer Jay-R. New Views is available on various digital music streaming services.

AWARD-WINNING rapper, songwriter and producer Zelijah has released his long-awaited EP, Press F to Drop Out, a collaboration with rising rapper Ellis G. The six-track EP navigates a story of two college dropouts pursuing their passion in music and arts, while facing the challenges of juggling adult responsibilities and landing a lucrative career out of their chosen paths. Press F to Drop Out explores music beyond the fringes and outside of the two artists’ comfort zone. “We made it happen by incorporating unusual sounds and instruments, as well as trying new genres we wouldn’t usually dive into,” Mr. Zelijah said in a statement. “The ending result is a colorful EP that caters to every emotion.” The EP’s carrier single, “Black Silk,” blends Miami bass with electronic and hip-hop music. Press F To Drop Out is produced, mixed, mastered, and written by Mr. Zelijah, and is co-written by Ellis G. The song “Hellhound” features Malli and was co-produced by Tashi, a young producer based in Manila. “Rags 2 Racks” and “Fake Friends” feature a guitar arrangement from Lexus Cabanting, and the latter also highlights a saxophone solo from SUD’s Carlos Dela Fuente. Press F to Drop Out is out now on digital music platforms worldwide via Sony Music Philippines.

Kapuso Mo, Jessica Soho’s (KMJS) story on “Babaeng Tinaga sa Mukha (The Woman Slashed on Her Face)” is a finalist at the 2021 New York Festivals (NYF) World’s Best TV and Films Competition. The two-part episode is one of the six contenders from the Philippines competing against nominees from other countries. GMA Network has five short-listed entries this year. “The Woman Slashed on Her Face” is vying for a Medal in the Documentary: Social Justice category and tells the harrowing story of a woman named Celia who was slashed across her face by her husband. Aired in June 2020, the story shed light on domestic abuse and how cases of gender-based violence further increased during the implementation of the community quarantine in the country at the height of the pandemic. A few months after the episode aired, Celia finally got justice — her husband was arrested by the police. KMJS aired the second part of the story in November 2020. The episodes were produced by Sancia Novie Palma. Winners of this year’s NYF will be revealed on Oct. 12 in Las Vegas. Kapuso Mo, Jessica Soho airs Sunday nights at 8:25 p.m. on GMA Network.

Godzilla vs Kong to premiere in PHL on HBO GO

DIRECTED by Adam Wingard, legends will collide as Godzilla vs. Kong which premieres on HBO GO from June 23. For decades, cinematic titans Godzilla and King Kong have been following their own, separate journeys in film, until now. In this iteration of their stories, Godzilla uncharacteristically attacks cities at random — cutting a swath of destruction across the globe. Meanwhile, Kong in this story is by far the largest incarnation to ever appear on-screen. As always, Kong has an endearing bond with a human — this time, it’s a young Skull Island orphan, who is, like him, the last of her line, Jia. As the paths of these two titans unexpectedly cross, they battle to restore balance to the Earth. The film stars Alexander Skarsgård, Millie Bobby Brown, Rebecca Hall, Bryan Tyree Henry, Shun Oguri, Eiza González, Julian Dennison, with Kyle Chandler and Demián Bichir. For more movies from the MonsterVerse, both Godzilla and Godzilla: King of The Monsters are available to stream or download on HBO GO.