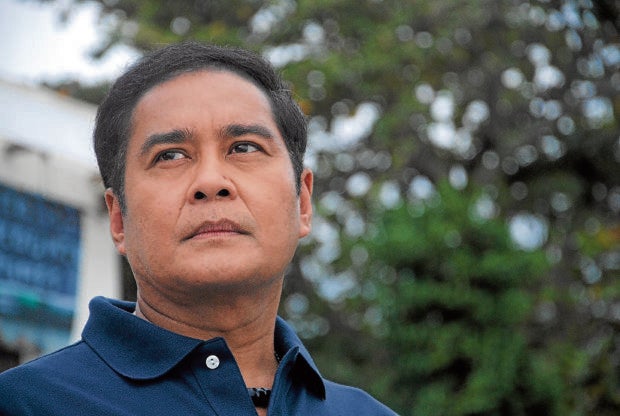 When I heard the good news about John Arcilla bagging the Volpi Cup for best actor (as Sisoy Salas in Erik Matti’s “On the Job: The Missing 8”) at the 78th Venice Film Festival, my mind went on flashback mode.

John and I have been friends since his “teatro” days in the ‘90s. His late aunt Erly was one of my mom’s “loyalists. During my son IC Mendoza’s child star days, John was his acting coach. He was such a superb mentor, so IC won best child actor when he was 4 (for “Shake, Rattle & Roll 4”) at the Metro Manila Film Festival in 1992.

Fame has not changed John a bit. Even if his victory at the prestigious film fest officially makes him a world-class actor, he remains down-to-earth. John has come a long way. From holding a coffee cup in his “Coffee na lang, dear” TV commercial during his early days in the biz, to snagging the much-coveted Volpi Cup.

John is going through a lot in his personal life due to the loss of loved ones. Despite the pain he has to bear, John still gives his 100 percent to his craft. So his Venice fest victory is God’s reward for his perseverance amid the trials. As a friend, he is also award-worthy.

Bravo, LunArcilla (moniker I coined for him). Thank you for giving us a reason to celebrate Pinoy pride amid the pandemic. May your passion become contagious so there will be more actors than mere movie stars.

Here’s my chat with John:

What was harder to portray, Heneral Luna or Sisoy Salas?

They’re both challenging and exciting characters. One of the work styles I have is that I make characterization easy for me. I can breathe better as a character when I am so relaxed with it. I will not make it difficult for me to go through the character’s journey.

Mere interest and passion in acting will bring someone somewhere. Acting is just being natural, anybody can do it because what we do in our daily life is actually acting. Being for me is acting, and acting is being. In addition, there are three kinds of actors for me: One is instinctive or natural; one is studied; and the third one is a combination of the two.

Looking back at your theater days, what were some of your struggles as an actor?

What movies impacted you the most?

What fascinates me about a movie is how it could teach me, not just as a mere spectator, but as a person who’s looking for answers about the mysteries of life and how the actors involved breathe through the story with truth as if it is their own.

Some of the titles that truly hit me are “Maynila sa Kuko ng Liwanag,” “Ganito Kami Noon, Paano Kayo Ngayon?,” “Oro Plata Mata,” “The Deer Hunter,” “The Hours” and “Out of Africa,” just to name a few.

After bagging the Volpi Cup, will you increase your talent fee?

Maybe. Depending on the film’s requirements and marketability, considering that I am not your young and buffed actor, but I can be something else. In practice, it should be a given and I think the producers would know how to deal with it.

How do you handle ham actors?

That’s a hard question. In my 39 years of acting since 1982, I have learned how to deal with different kinds of actors, and I react as a character. Whatever it could be, I have to bring the scene to its objective utilizing my coactors’ capability or incapability. Learning goes on and on.

What are you not good at?

What is the “John Arcilla” acting technique?

My basic is Stanislavsky and Eric Morris’ Being. But as I go along, I discover my own, improvise and explore new ideas depending on the work at hand. I do not complicate scenes. Its simplicity is its complexity.

I give what the story requires, but I play around with possibilities on the spot, depending on what my coactor is giving me.

How will you keep your feet on the ground now that you’re at par with Hollywood A-listers?

I simply believe that no human being can live and survive without keeping their feet on the ground, and I am a human being. I cannot be anything else.

‘Bekis on the Run’ cast weighs in on LGBT issues

Christian Bables’ claim to fame is his superb portrayal of a gay role (as Barbs) in the 2016 hit movie, “Die Beautiful” (DB). He is at it again in “Bekis on the Run” (BOTR), which is now streaming on Vivamax.

Christian dares to outdo his Barbs character in DB by being game for a kissing scene with Sean in their movie. So, make way for this bromance in the time of COVID-19. Aside from a guaranteed laugh trip, BOTR also tackles corruption and gay men in the military. Heed its call: Makibaka, este maki-beki!

C: Once I’m in the shoes of my character, I’m ready to go where the director leads me. I would not have been able to pull off my kissing scene with Sean if it was not Direk Joel at the helm of our movie. I have full trust in him. Even if Sean and I are both straight, we were both in character, so there was no room to feel awkward.

J: In BOTR, we touch on social issues concerning the LGBT community in a light way. Our film gives gays a chance to be heard. Depiction of gays must always be politically correct.

D: I am for gay marriage. No one has the right to dictate who we should love. Love must be free for all.

C: I wanted to take a break from doing gay roles. But it seems that gay roles never get tired of me. I am a proud ally of the LGBT community. But falling for a gay man is not possible for me because I prefer women.

D: It’s unavoidable to be compared to my dad, Cesar Montano. He set a standard in acting. So instead of feeling pressured, I use it as a motivation. I want to prove that there’s more to me than being Cesar Montano and Teresa Loyzaga’s son.

Julia and 2 Marcos on heartbreak

Julia Baretto is back on primetime TV. (Catch her in “Di Na Muli,” Saturdays at 8 p.m. on TV5). In the show, she’s paired off with hotties Marco Gumabao and Marco Gallo.

Julia portrays a woman burdened with precognition of specific events in the future. The series is about love that’s found and lost. It will make your heart wonder why it keeps searching for something that you already found many love stories ago.

J: The character I portray made me feel like a giddy high school girl all over again. Marco Gallo’s character treated me like a princess. But Marco Gumabao’s character brought about “first love” vibes. A combination of both their characters would be the perfect guy that I would fall for.

MG: When I am broken-hearted, I resort to “add to cart” therapy. But I’m not the type who dwells on regret. I focus more on the lessons I learned from my mistakes in love.

J: I will only give up on love when the one I love gives up on me. Once he walks away, so will I. No point in forcing love when it’s over.

The hottest entertainment news straight to your inbox