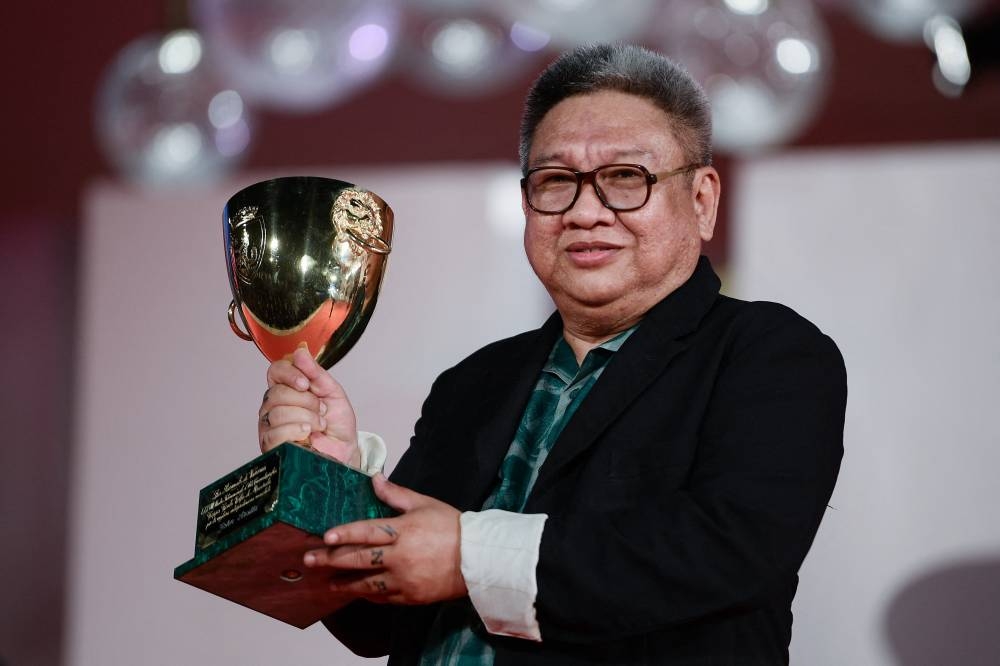 Filipino director Erik Matti poses with the trophy he received on behalf of actor John Arcilla, the Coppa Volpi for Best Actor in “On the Job: The Missing 8”, during the Winners’ Photocall following the closing ceremony of the 78th Venice Film Festival on September 11, 2021 at Venice Lido. (Photo by Filippo MONTEFORTE / AFP)

He is now in the league of Brad Pitt.

John Arcilla made history on Saturday when he won the Best Actor award at the 78th Venice International Film Festival,

a day after posting a photo of the Hollywood bigwig holding his Coppa Volpi for Best Actor that he won in 2007, wishing for the same accolade “someday.”

Arcilla was declared this year’s Best Actor for his role as a journalist in Erik Matti’s political crime thriller, “On the Job: The Missing 8.” In the much awaited sequel to 2013’s “OTJ,” which debuted at the Cannes Film Festival’s Directors’ Fortnight that year, Arcilla reprises his role as Sisoy Salas who investigates a crime syndicate that temporarily frees prisoners as political assasins.

OTJ 2, which will be shown as a series beginning today on HBO Go, is the only Southeast Asian movie selected for the main competition at the Venice festival’s ongoing 78th edition. A total of 21 other A-List movies from around the world made it to the cut.

Matti, who attended the awards in the northeastern Italian city along with cast member Dennis Trillo, received Arcilla’s award on his behalf.

“Well if there is something that I really regret tonight is that I will not be able to kiss my own Volpi Cup there in the middle of Venice and on that red carpet just like the other 77 great actors whom I admire who have already kissed their own, this most wonderful and prestigious award.

[But] I am also the happiest actor tonight, of course, also because I know that we came from different countries and we have different languages and cultures and yet I can feel oneness tonight and I can feel that you understand me and we understand each other. It’s because of the art of cinema,” he said.