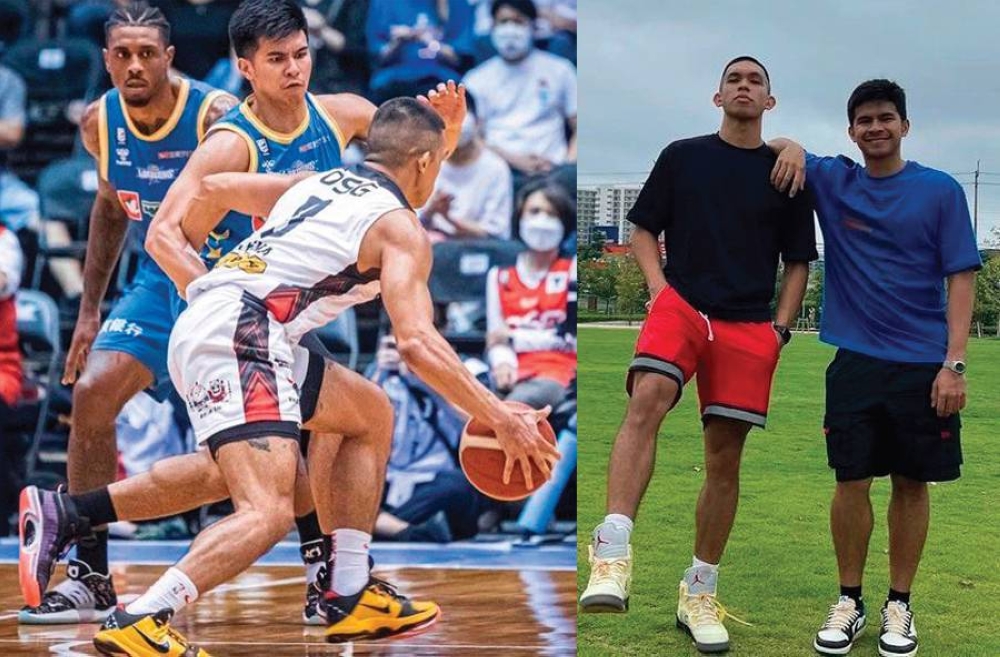 Imagine a movie flashback scene. Two young brothers — one named Kiefer and the other Thirdy — going at it in a makeshift basketball court, hoping to make it big time in a grand stage of professional basketball someday.

Both sons looked up to their father, Bong Ravena, a multiple time champion player in the PBA. They both dream to follow the footsteps of their dad who is a former PBA Rookie of the Year and Most Improved Player awardee.

Two decades later, Kiefer and Thirdy now share the spotlight playing in the Japan B.League. They bring honor not only to the Ravena family but also to the country as they are playing there as Asian imports for their respective teams.

Thirdy was the first to make it in Japan last year when he signed with the San-en NeoPhoenix. Kiefer followed this year, towing with him the next wave of Filipino players trying to make their mark in Japan like Kobe Paras (Niigata Albirex BB) and Ray Parks (Nagoya Diamond Dolphins), among others.

Kiefer signed up for the Shiga Lakestars and about a week ago, both players took center stage as they split their first two head-to-head encounters as pros in Japan.

Playing against Kuya Kiefer has always motivated the younger Thirdy.

He actually had big shoes to fill for Ateneo when Kiefer became known as “The Phenom” in college basketball and made his mark even before making it to the pro league.

Thirdy captured the limelight a few years later and, in fact, he had eclipsed his brother’s accomplishments.

The younger Ravena became a three-time UAAP champion while playing for the Ateneo Blue Eagles and in the process, became a three-time Finals MVP. He was also awarded the College Basketball Awards MVP two years ago and that also earned him a spot in the Gilas Pilipinas national program.

Thirdy couldn’t help but to look back at their humble beginnings and how that sibling rivalry with Kiefer motivated him to become the best version of himself.

“Looking back, you relished those times you were playing together, barefooted and playing on a cement floor. Now, you’re here in Japan playing professional basketball as Asian imports. You’re not just playing for yourself, but you’re representing a country and while you’re playing against your brother. It’s such a surreal feeling and it’s a story worth sharing until I get older and tell my grandkids, that this is one of the greatest experiences I had in my life,” said Thirdy during the zoom press conference for the launching of his documentary to be presented by VivaMax.

“We both grew up in such a competitive household. I don’t know how to explain it, but we’re really very competitive — whether it’s small board games at home or one-on-one at the gym.”

For Thirdy, playing on the big stage with his brother gave him an added motivation. He knew, too, that Kiefer is likewise doing the best he can to help his team win.

“It has really motivated us, especially that we were able to do it in a different country, in Japan, in front of a lot of Filipinos who came to watch live. I’m very thankful for them. Most of them came from far places and travelled three, four, five hours just to watch us. And of course, to those thousands who watched via live stream, thank you. It’s such a crazy feeling you just think about when you were a kid growing up to pursue a career in basketball,” he added.

As professional players in Japan, the brothers knew they’re not just there to make a living out of basketball, but they’ve also become ambassadors of the game, representing the Philippines.

“Well, definitely, it’s a big responsibility and commitment as well, not just to yourself, but to the game. Coming to the games, you’re representing a country and you need to perform every time you play. You have thousands and thousands of people watching. You have to show up and you have to play to the best of your abilities because you don’t want to say that you didn’t give your best,” said Thirdy.

“I just want to say that I gave my best, even before the game started, I did all the preparations in order to play that game and show all the advantages that I have before that game even starts. That’s going to be my commitment and that’s what I’m giving every day to the Filipino community and this organization as well.”