VENICE, ITALY: In my five years as Film Development Council of the Philippines (FDCP) Chairperson, it was only my first time to attend the Venice International Film Festival, the oldest and one of the most prestigious festivals of its kind. Despite the pandemic, I was fortunate to attend it this year, in support of “On the Job: The Missing 8,” the only Filipino (and Asian film) in the main competition. I was also there to promote the FilmPhilippines incentives to possible international partners and collaborators.

The Philippines created a strong presence in the festival not only with “On the Job: The Missing 8” by Erik Matti, but also with other Filipino projects that are making a statement in the industry programs within the festival.

Filipina filmmaker Isabel Sandoval, one of the promising filmmakers to watch out for, also premiered her short film “Shangri-La,” a collaboration with the Italian high fashion label Miu Miu under the Venice Days section.

Along with these are several activities and events hosted by the FDCP to highlight the Philippines’ participation and champion Philippine Cinema in Venice.

Last September 9 at the Venice Production Bridge, the Agency hosted an exclusive panel discussion entitled, “From the Philippines to the World: The On The Job-Franchise and Exploring New Ways of Global Content Distribution.” Moderated by Venice Film Festival Programmer Paolo Bertolin with director Matti and producers Dondon Monteverde and Quark Henares as panelists, the panel discussion chronicled the “On the Job” franchise’s journey from its development to production. 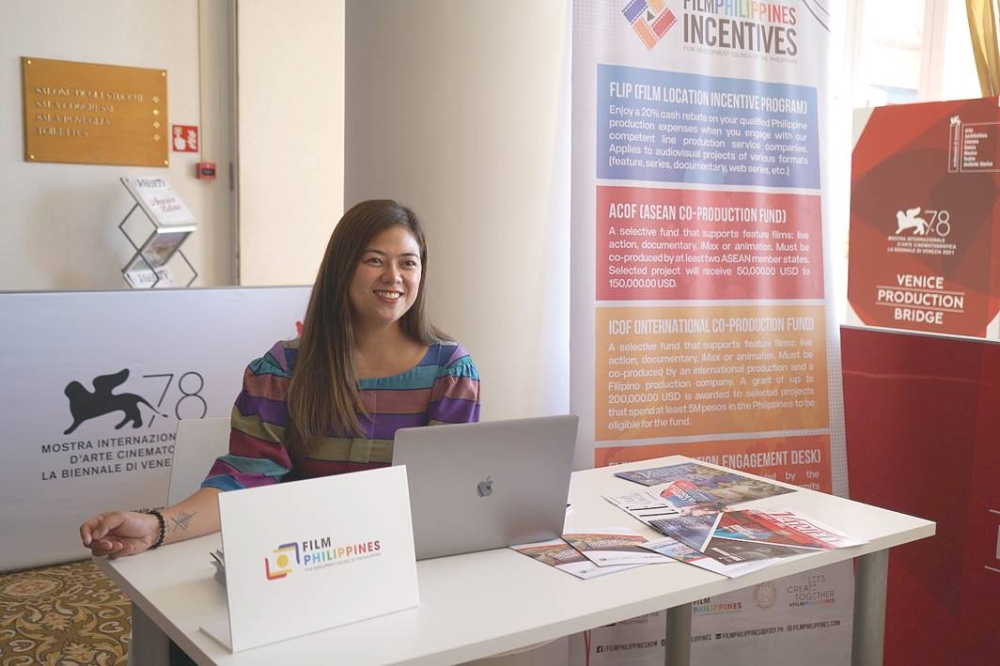 FDCP Chairman and CEO at the
FilmPhilippines booth in Venice.

Towards the end of the panel discussion, FDCP’s FilmPhilippines video presentation was played to showcase the international co-production film projects that the Philippines has already supported since the launch of our incentive program.

It was pretty surreal to present this for the first time on a global stage. Until the presentation, a lot of people did not know the Philippines has incentives that can significantly help filmmakers and workers in their productions.

Some were even shocked to see the numerous acclaimed international feature films and series we have worked with. Director Matti himself was pleased and gave a lot of good words to commend the mechanisms of support and initiatives implemented by the FDCP to support our Filipino filmmakers.

The FDCP also set up a booth at the Venice Production Bridge to promote the FilmPhilippines Incentives and attract more international producers to partner with our Filipino production companies for co-production projects and location filming.

Ending the fruitful panel on a sweet note was the Philippine Cinema cocktail, also hosted by FDCP in the evening, which was well attended by international movers and shakers to explore a future collaboration to further promote Philippine Cinema to the world.

Director Matti, actor Dennis Trillo, producers Monteverde and Henares, and the rest of the “On The Job: The Missing 8” team walked the red carpet on September 10, followed by the film’s gala premiere screening in the Sala Grande, where the film received a five-minute standing ovation from the audience. Trillo also earned praises from award-winning actress Cynthia Erivo and Oscar-winning director and jury head of the main competition, Bong Joon-ho.

I had the chance to see the film on the big screen and witnessed how it was well-received in Venice. It brings great pride to have a Filipino film compete in one of the most prestigious and oldest film festivals in the world, equivalent to the country participating in the Olympics.

The film, which took the team three years to complete, lasted for three hours and 28 minutes. From a world premiere at Venice to HBO Go, every day they dedicated to making the film was worth it. The music, cast, and story were beautifully made, and the output was truly world-class.

Among the amazing highlights of On the Job in Venice was John Arcilla’s historic win of the Volpi Cup for Best Actor Award. Arcilla is the first Filipino actor to win the best actor award in Venice. He delivered his acceptance speech virtually and it was an incredible win not just for him but for the film industry.

I arrived on the last three days of the festival. Fortunately, I met with Venice Film Festival Artistic Director Barbera despite his busy schedule. During the courtesy call, we discussed future plans and collaborations with La Biennale to further promote Philippine cinema to the world. He is amazed by the talents we have in our country. Captivated with Matti’s film, he is looking forward to discovering more diverse and groundbreaking stories from the Philippines.

We are grateful that FDCP was able to support the Filipino delegation on behalf of the national government, and we are also thankful to be joined by Philippine Ambassador Domingo Nolasco and his wife Cecile Nolasco, Vice Consul Flaureen Dacanay, and Honorary Consul in Venice, Atty. Giorgia de Biasil who personally attended the festival.

We were at the right place and at the right time to intensify the message we want to put out there, and we are making sure that we can provide space for our Filipino talents and stories to the world.

The success of “On the Job: The Missing 8” truly continues to pave the way for more of our own to be shared to the world. I believe that this is the future. This is what FDCP is trying to champion – for our local films to be relevant and globally competitive. The film set the bar high and there is no turning back.

We are going in the right direction. It is not a perfect ride, but what “On the Job” has achieved proved it is possible to strive for truly quality and world-class stories from the Philippines and that they can have space in the world’s industry. To our Filipino filmmakers, you can be assured of FDCP’s continued support to you. Let us continue to elevate our standards and introduce trailblazing ideas and narratives.

What a way to celebrate the very first Philippine Film Industry Month. Here’s to many more firsts for Philippine Cinema!

Makita Manila 21 mins ago
They’ll do it with ladders

Makita Manila 21 mins ago
They’ll do it with ladders