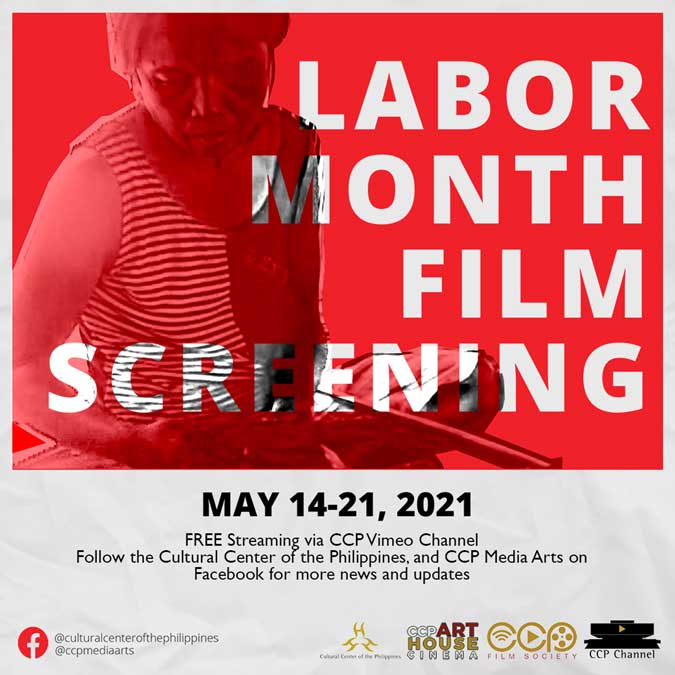 THE CCP Arthouse Cinema salutes Filipino workers in this month’s film offerings on the Cultural Center of the Philippines’ (CCP) Vimeo Channel from May 14 to 21. To be shown are select films and documentaries from Gawad Alternatibo which mirror the daily plight of Filipino workers. Take a peek into the lives of factory workers in Jon Red’s 10-minute film Ang Pabrika. Directed by Cha Escala and Emerald Hidalgo, Pasko ni Intoy (Intoy’s Christmas) is a 30-minute documentary that portrays the bitter-sweet Christmas of a child-laborer in a remote community in Leyte. To watch the films for free, go to vimeo.com/ondemand/ccparthousecinema and use the promo code LABOR.

THE EUROPEAN Union (EU) Delegation to the Philippines mounts the virtual edition of the annual cultural festival Lakbayin Natin ang EU on May 16, 10 a.m., via the EU in the Philippines Facebook Page. This is a part of the ongoing Viva Europa celebrations and focuses on the theme “Children for Friendship,” featuring arts, crafts, songs, poetry, and storytelling from the Embassies of the Czech Republic, Germany, France, Austria, Poland, and the Philippine-Italian Association. The activities include a reading of Adolf Heydukh’s poem Štěstí or (Fortune) in both Czech and in English by the daughters of the Czech Ambassador and the Czech Deputy Ambassador; and Country Comparisons in which German grade schoolers will appear in a video highlighting comparisons between Germany and Philippines in terms of weather, clothing, animals, and landmarks. France will present 14-year-old soprano Yumi —  the World for Opera, Junior Division champion of the 2019 World Championship of Performing Arts and the host of Musikwela Kids TV —  performing “L’amour” and “Ode to Joy,” while Italy will mark the 140th anniversary of the first appearance of Pinocchio through storytelling of Ang Pangako ni Pinocchio narrated by the storytellers of the National Library of the Philippines, and a nursery rhyme on friendship by Italian writer Gianni Rodari, interpreted by three Italian students. There will also be a “Country Tour” where kids will be taken around Austria to learn more about its rich culture; Rhyme by Poland where representatives from the Polish Embassy will recite the Lokomotywa or (Locomotive) by Polish poet Julian Tuwim. Samantha Belwa of Teens for Unity PH will teach how to make friendship bracelets. There will also be a display of the winning works in the EU Delegation’s Art Contest.

Photo portraits at the Art Fair

ART/n23, a multi-city agency for Philippine contemporary artists, will be presenting the work of Paris-based Filipino photographer Ding Gerrous during Art Fair Philippines 2021. Ding Gerrous (born Panganiban) specialized in an artisanal photographic process called wet plate collodion. In a sense, it is the ancestor of film as we know it. Interestingly, Mr. Gerrous uses recuperated window glass panes from old buildings in Paris. All of his works are unique pieces, working on both portrait and conceptual photography. To adapt during the lockdown, art/n23 has partnered with Mr. Gerrous to produce virtual Zoom portrait sittings. Sitters will need a decent Internet connection, natural or spot light, and a phone or computer camera. Portraits may be done with props, favorite art works, or friends and family members. The sittings take 20 to 30 minutes after which sitters will receive digital proofs and be shipped their glass portraits of 5×7 inches. Book a sitting through www.artn23.com, or e-mail contact@artn23.com. Art Fair Philippines is ongoing online until May 16, at www.artfairphilippines.com. Metro Mom convention on SaturdayMetro magazine is set to inform, involve, and recharge moms with a Mother’s Day event dubbed “Metro MomCon,” a one-day gathering on May 15. The free event will take place on Zoom, and will include panel discussions and workshops on parenting, food, home and living, relationships, and beauty. Here will be a panel discussion on  “How to Keep Your Sanity While Raising Your Kids” with Metro editor-in-chief Geolette Esguerra, Dr. Lia Bernardo, and celebrity moms Andi Manzano, Bianca Gonzalez-Intal, Jodi Sta. Maria, Mikaela Lagdameo-Martinez, and Sofia Andres. There will be a “Shibuya Hotpot Cooking Workshop,” an interactive online cooking workshop with chef Him Uy de Baron of Himpossible Recipes who will show how to prepare Japanese dishes for four to five people. Happy Ongpauco will show new ways to make celebrations at home even more special in one workshop. Beauty experts will demonstrate how to glam up for Zoom meetings, virtual gatherings, and home celebrations. Everything is covered from makeup with Albert Kurniawan, hairstyling with Lourd Ramos, to haircare with Dr. Risa Caldoza-de Leon and Dr. Cecilia Catapang. Janeena Chan leads this workshop as its host. A juicy and relevant session will cover everything about getting intimate during these times — over cocktails. Join the discussion with host Delamar Arias and sex and relationships therapist Rica Cruz and create your own cocktails with free kits from Served Manila. The kids can also take part in various workshops, including PETA’s Children’s Theater Sneak Peek (for kids ages seven to 12; free for the first 30 registrants), OneTwoStep HipHop Dance Workshop for Kids  (ages four to seven and eight to 11; free for the first 30 registrants for each age group), and WIKA’Y GALING! Filipino Workshop for the Family (for kids ages six to 10). For more details, visit Metro.Style and @metrodotstyle on IG and Twitter, and metrodotstyle on Facebook.