More dramatic than any movie imagined, today is the 20th anniversary of the “9/11” twin towers collapse. The numbers and emotions are seared into the memories of everyone old enough to watch the news at the time – a series of planes crashing into iconic buildings that melted and collapsed in seconds. TV captured the scenes and sounds as over 3,000 people died, including some 300 heroic firefighters and some tenants leaping to their deaths, with some able to communicate with their loved ones in the last few moments of their life through mobile phones. All watchers could not help but feel the horror and their own mortality in those moments.

The 9/11 event was a conspiracy woven and executed unlike any other. Yet it was but a prelude to much larger tragedies in the ensuing “war on terror” that resulted in millions of deaths, using trillions of dollars that fed a monstrous “defense” weapons industry, growing fat on war and deepening enmity and poverty among peoples.

Conducting the war on terror for reasons of American anger and security, even for those who didn’t agree, are valid reasons for the carnage and were understandable.

Except, they turned out to be built on a mountain of lies. George W. Bush knew Iraqis were not the ones who had to do with 9/11 or weapons of mass destruction, so the truth had to be hidden for decades. Thus, the PR that the wars were to prevent the Iraqis from harming Americans or to liberate the suffering of peoples (by killing 1 million more?) had to be implanted. It was a war for oil – to frighten other rulers into following US desires “or else,” to keep the US dollar control over the world, to keep the US as the hegemon of the world. 9/11 became the case of “a crisis too good not to use.” 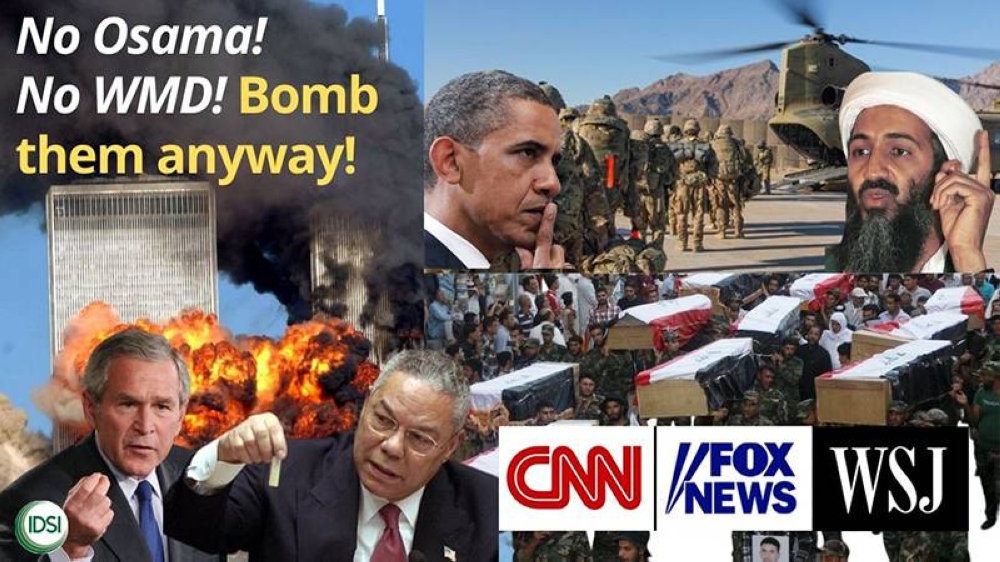 The operators – 15 out of 19 hijackers – and financiers were Saudis, but the accusation of Iraqi threat was manufactured to justify destroying the country for its oil and protecting Saudi Arabia. Afghanistan was invaded and occupied for 20 years, but it was another country that gave sanctuary to Osama bin Laden. Syria was bombed, one day prior to any investigation of the alleged gas attacks, which BBC admitted last week as having used faked scenes that the gas attack in the Syrian city of Douma was by its president Bashar al-Assad. Why do CNN, and Fox News’ earnest-faced interviewers ask with surprise and anger if resource experts put to doubt “the consensus findings of our intelligence agencies?”

President Joe Biden last week gave an executive order to the justice department to study releasing more of the results of investigations. This is after 10 years’ fight by families of victims to have access to the information, classified as secret all through these years “for reasons of national security” by different presidents – Obama, Bush, et al.

How and why do the United States, the United Kingdom and France keep secret the basis of dozens of invasions, with millions killed, tens of millions of refugees and trillions of dollars spent on wars? The presidents knew – the ambiguity was used for favors for and betrayals of nations. The findings came out as researchers and whistleblowers came out – available information forced the government to investigate and declassify further. Only in 2016, some 28 pages of blocked findings were at least partially revealed. Now, more will be brought to light. What have these revealed so far?

Clearly (for intelligent people), parts of US intelligence knew of, and President Bush was warned of, impending terrorist attack. “Bin Laden Determined To Strike in US ” was the brief the president received from the CIA in an Aug. 6, 2001 brief – 36 days before the September 11 attacks, including indications of preparations for a hijacking of US aircraft. When two men with long ties to the Saudi government, Mohammed Al-Qudhaeein and Hamdan Al-Shalawi, tried to get inside an American West Airlines plane’s cockpit in 1999, it was the Saudi embassy that paid for their tickets. According to the censored 28 pages, the FBI assessed the incident as an attempt to test the security procedures for planning al-Qaida operations.

Yet nothing was done. President “Dubya” Bush just chose to ignore the reports – whether out of disbelief, negligence, lack of comprehension according to some, or out of some greater evil plan, all the indications and warnings of a terror event coming were ignored.

Among many other corroborating details, Omar al Bayoumi, who works for the Saudi government, helped hijackers Nawaf al Hazmi and Khalid al Mihdhar move into apartments and open bank accounts.

When the Joint Inquiry uncovered this damning information, it did not attempt to investigate the accuracy or significance of this information.

Obama banned US citizens from suing the Kingdom of Saudi Arabia because it “may lead to suits vs the US” – for similar conspiracies, massacres and deaths around the world? Senators Pat Roberts and Jay Rockefeller, among others, objected to public disclosures.

Florida Sen. Bob Graham, of the Joint Inquiry into Intelligence Community Activities before and after the Terrorist attacks of Sept. 11, 2001, said, “the FBI has gone beyond just covering up…into what I call aggressive deception.”

Many advanced warnings from different independent sources were ignored. The CIA kept much information from the FBI, e.g., an Iranian warned the FBI several times of a coming September 11 attack. Sibel Edmonds was allegedly fired for pushing for revealing the investigations’ actual results.

Former governor Jesse Ventura notes what many historians observed, that with the US, “[e]very war starts with a false flag operation.”

Was the treatment of the Philippines any better?

But Filipinos still believe in the preaching for “rules-based order, level playing field, fairness, human rights?” Filipinos not only believe, they expect that Philippine political candidates will plant fake news and try to deceive everyone but will quote US channels and intel as gospel truths, blindly echoed by the local media. Despite the US underhandedly purchasing the Philippines from Spain, faking the start of the Spanish-American war that we fell under, faking that Filipinos started the hostility in the Philippine-American war, not giving the promised pay to our veterans, flubbing that they are better at negotiating Scarborough for us and should be left alone in secret, telling us we can together just pin the blame on China. These all would take some effort to believe, especially after a dozen times, assuming an audience with capacities for normal decisions.

No one can trust Western mainstream media without adding their own research based on cross referenced data from all sides. To not do so would be a sign of weak mind, questionable future, and systemically poor, periodically disastrous decisions. And there is nothing more disastrous than a badly managed war you are fighting for others’ benefit or one that you have been lied into undertaking; as in the cases of Iraq, Afghanistan and Syria, is the Philippines going to repeat our grandfather’s lesson again.

New Worlds by IDSI (Integrated Development Studies Institute) aims to present frameworks based on a balance of economic theory and historical realities, ground success in real business and communities, and attempt for common good, culture and spirituality ([email protected]).